Welcome to Torr Down South Devons

Located at Trentham, the gateway to the Southern Highlands 705 metres / 2313 ft a.s.l., in the State of Victoria, Australia.

Torr Down South Devons under the 'Learning Tree'

Latest News - Click to see Torr Down in the Press

The two studs wish to promote polled cattle in the Red Wagyu Akaushi breed and Torr Down Marvel 3 has this ability along with the attributes of faster growth, excellent carcass specifications especially eye muscle, together with his outstanding docility, plus the South Devon’s renowned maternal traits.

Red Wagyu Akaushi originated from the prefecture of Kumamota located on the Japanese island Kyushu where they graze the sacred region of Mt Aso.    Numerous samples of DNA collected from Torr Down Polled animals leads to the conclusion that, quote, “South Devons contributed to the formation of the breed Akaushi” – Red Wagyu.   In type there is a definite similarity between the two breeds, both marbling well when finished on grass at two-2 ½ years of age.     Red Wagyu Akaushi also have the ability to achieve high marbling scores when fed grain in feedlots along side black Wagyu.

The outstanding characteristics have been recognized in many overseas countries where Red Wagyu Akaushi have been crossed with Bos Indicus such as Brahman, Nelore and Zebu.   Their ability to thrive in tropical areas with resistance to disease and parasites has encouraged producers to cross with their herds to attain a high quality result to sell in their domestic markets with financial gain.  Other countries such as China, South Africa, EU, USA and Canada have gained substantially from the introduction of the breed.  The demand for superior beef in many countries has increased sharply due to their rising middle class populations.

In due course, with the introduction of polled red Wagyu Akaushi sires, it is hoped that breeders will recognize the advantages in using such animals in their commercial herds for the benefits they can provide.

The interest in Torr Down South Devons commenced several years ago, probably brought about by the Torr Down Stud winning the mature section of  the Paddock To Palate  competitions at Avoca ,Victoria and the following year again at Sydney  in the Grand Final competition , this time securing the Grand Champion  award against all other breeds.

Following this, steers sired by Torr Down bulls won the Supreme Carcase Awards at The Royal Adelaide Show 2011 and The Royal Melbourne Shows 2012 & 2013 .

The TORR DOWN WEBSITE www.torrdownsouthdevons.com.au    which is regularly updated, also extols the virtues and numerous stories, regarding Torr Down Genetics Worldwide.

The Harvey’s in their 50th year since establishing the Torr Down herd of Pedigree South Devons in England, feel very honoured to have had their senior stud sire, chosen to contribute to the progress of the Red Wagyu breed.

Marvel has gone into quarantine for semen collection, for the second time in his life. Previously  collected for the U.K. and NewZealand  in 2013. 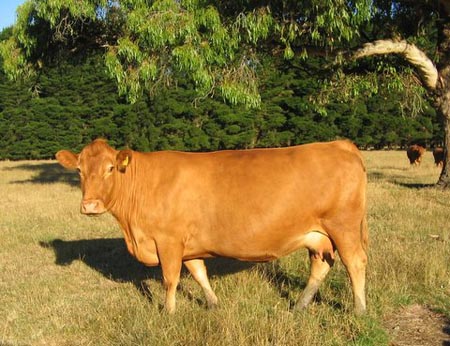 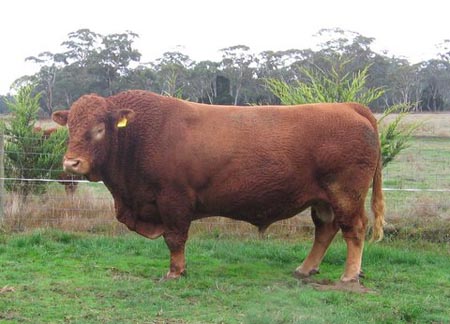 First progeny of Marvel 3 in the UK

"Your pot of Gold at the end of the Rainbow"